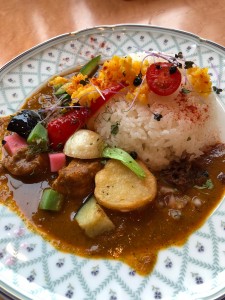 1)   The start of a second round of trade talks between Japan and the United States will be delayed until after fresh tariffs imposed on China by the United States come into force on Sept 24, a Japanese government source told Reuters.

2)   The Tokyo Organizing Committee of the 2020 Olympic and Paralympic Games and the Tokyo Metropolitan Government has decided to pay volunteers 1,000 yen a day to cover their transport expenses regardless of the venue they are sent to.

3)   Shinzo Abe is poised to win a third term as head of his political party on Thursday, putting him on track to become Japan’s longest-serving prime minister and realize his dream of reforming the constitution.

Polls show Abe, 63, is expected to romp to victory in a two-horse race for the leadership of his conservative Liberal Democratic Party (LDP) that will effectively hand him three more years as PM.

4)   Japan’s export growth accelerated in August from the previous month as shipments to the United States grew as Tokyo looks to avert a trade war through talks with Washington expected later this month.

5)   The leaders of North Korea and South Korea have signed a joint declaration after concluding their 3rd summit talks.

The declaration states that North Korea is ready to permanently dismantle its nuclear facility in Nyongbyon, on the condition that the United States takes reciprocal actions.

6)   US spaceflight venture SpaceX says Japanese entrepreneur Yusaku Maezawa will become the first private passenger to fly around the Moon on its next-generation rocket.

SpaceX CEO Elon Musk made the announcement alongside Maezawa at a rocket factory in Los Angeles on Monday. Maezawa is the CEO of Start Today Company, which operates the major online fashion website ZOZOTOWN.

7)   China’s leading online travel agency says Japan will be the top destination for Chinese travelers during the upcoming holiday week.

Ctrip.com said on Tuesday that a record of nearly 7 million Chinese are expected to travel overseas during the week, which begins October 1st, the day China commemorates its foundation. 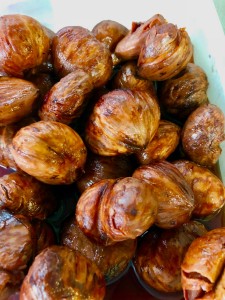 1)   Naomi Osaka’s victory in the U.S. Open has added her to a growing list of athletes, Nobel Prize winners, and beauty pageant contestants who have raised the issue of what it means to be Japanese.

The daughter of a Japanese mother and a Haitian father, Osaka was born in Japan but raised in the United States. But she is being lauded in Japan as the first from the country to win a Grand Slam singles tennis title.

2)   Japan is gearing up to accept more foreign workers as its own population is on the brink of a steep decline, Foreign Minister Taro Kono said Thursday.

Kono told a World Economic Forum meeting in Hanoi that Japan gains “value added” by accepting foreigners, especially since its aging population and low birth rate mean the country is shrinking by a half-million people a year.

3)   A week after a powerful quake rocked Japan’s northernmost main island of Hokkaido, people mourned the deaths of 41 people as around 1,600 others remained in shelters as of Thursday.

4)   Japan and Vietnam on Thursday urged the United States to rejoin a sprawling Pacific trade deal, almost two years after President Donald Trump’s withdrawal dealt a major blow to what would have been the world’s largest free trade pact.

Trump pulled out of the Trans-Pacific Partnership (TPP) deal in one of his first post-election moves as part of his “America First” clarion call, declaring the 12-nation trade pact a “job killer”.

5)   Facebook says it’s expanding its fact-checking program to include photos and videos as it fights fake news and misinformation on its service.

The company has been testing the image fact-checks since the spring, beginning with France and the news agency AFP. Now, it will send all of its 27 third-party fact-checkers disputed photos and videos to verify — or the fact-checkers can find them on their own.

6)   Apple Inc introduced its largest-ever iPhone and a watch that detects heart problems on Wednesday in an attempt to get customers to upgrade to more expensive devices in the face of stagnant global demand for smartphones.

The topic was center stage at the World Economic Forum (WEF) in Hanoi, where warnings abounded that countries including Vietnam, Indonesia and Thailand where manufacturing has driven GDP and employed millions would be among the worst affected.

8)   Russia and China have begun joint military drills in the Russian Far East.

The Vostok military exercises are held every 4 years. Russia’s Defense Ministry says the 2018 drill, which kicked off in Siberia on Tuesday, is the largest since the fall of the Soviet Union. It involves 300,000 soldiers, 36,000 tanks and other vehicles, some 1,000 aircraft and 80 vessels.

9)   British author Kazuo Ishiguro has been bestowed Japan’s Order of the Rising Sun, Gold and Silver Star, in an award ceremony.

The Japanese government issued the award to the Nobel Prize-winning author, who was born in Japan, in recognition of his contribution to promoting cultural exchange with the UK.

10)   The UN Food and Agriculture Organization says more than 820 million people around the world are going hungry.

The FAO released a report on the state of food security and nutrition on Tuesday.

The agency estimates that the number of undernourished in the world reached 821 million in 2017, or around one out of every 9 people.

11)   The Alipay payment method is simple. Customers use their smartphone to scan a QR code displayed by a business, or the business can scan the QR code in the customer’s phone. Each user’s app is linked to a bank account in China. The transaction goes through Alipay. More than 700 million Chinese people use the service to pay for groceries, public transport, street food, and more.

Kubota officials said some of the products had not met the hardness levels or compounding ratio of metals that had been agreed upon with customers.

The officials said an employee first reported the data tampering, and they’ve confirmed nearly 4,400 cases of misconduct out of the more than 20,000 products sold for about 5 years until July.

1)   Floods, typhoons, earthquakes and a record-shattering heat wave. The summer of 2018 has been an unusually destructive and deadly one in Japan, even for a country prone to natural disasters:

2)   A group of hackers has been planning to target the American and Japanese public by emailing fake offers of tickets to the 2020 Tokyo Olympics in order to steal private information, a Singaporean security firm reported Thursday.

3)   North Korea’s Kim Jong Un has given his first time line for denuclearization, aiming for the end of U.S. President Donald Trump’s first term, Seoul officials said on Thursday, prompting thanks from Trump who said they would “get it done together.”

4)   Burt Reynolds, the handsome film and television star known for his acclaimed performances in “Deliverance” and “Boogie Nights,” commercial hits such as “Smokey and the Bandit” and for an active off-screen love life which included relationships with Loni Anderson and Sally Field, has died at age 82.

5)   A powerful typhoon ripped through western Japan on Tuesday, leaving at least two dead and many injured, while strong winds and high waves closed Kansai International Airport and caused a ship to smash into a bridge linking the airport with the main island.

6)   A powerful earthquake paralyzed Hokkaido on Thursday, killing at least nine people, triggering landslides and knocking out power to its 5.3 million residents.

The death toll from the 6.7-magnitude, pre-dawn quake was likely to rise as rescuers searched houses buried by landslides. About 33 people were missing and 300 were injured, public broadcaster NHK said.

7)   Nauru President Baron Waqa is seeking a formal apology from China for what he calls the insolent behavior of a Chinese official at an international forum.

Waqa said on Tuesday that a Chinese diplomat demanded to speak when another country’s prime minister was due to give a speech. He slammed the move as bullying. He said bigger countries should not disrespect Pacific island nations, adding that China just needs them for its own purposes.

9)   The US trade deficit with China for July hit a record high. The Commerce Department says the deficit stood at 36.8 billion dollars. That’s up 10% from the previous month and the gap is widening at its fastest pace since 2015.

Washington is expected to announce a third round of additional duties as early as this week. The trade deficit with Japan was 5.4 billion dollars, up 2.9%. Analysts say Tokyo could face more pressure from Washington to boost imports of American farm produce.

10)   The operator of Chinese online payments giant Alipay has revealed his future business plans. They include attracting more tourists to Japan.

“We want to offer visitors to Japan a cashless experience, and work together with business partners to contribute to the Japanese economy.”

11)   The operator of Kansai International Airport on Sept. 6 apologized for inconveniencing thousands of travelers after being overwhelmed by a powerful typhoon and announced plans to partially resume domestic flights from the next day.

12)   The Tokyo District Court on Sept. 5 accepted the written statement of a former Tokyo Electric Power Co. executive who claimed that his boss abruptly postponed tsunami prevention measures at the Fukushima No. 1 nuclear power plant in 2008. 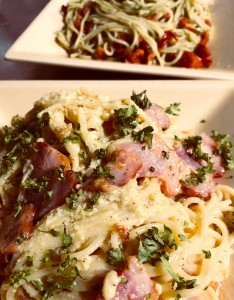 A 17-year-old boy on a motorcycle crashed and died in Osaka on Thursday night after being chased by police who were searching for a fugitive in a high-profile manhunt.

A patrol car began chasing the teen around 9:20 p.m. after police received a report of a sighting of a man resembling Junya Hida, 30, who escaped from a police station in mid-August .

The high school student, who did not have a driver’s license, driving the wrong way down a one-way road and running a red light before crashing into a roadside pole.

Police said the motorcycle had been stolen two weeks ago.

2)   Six people died and two others were seriously injured in a motorcycle accident in the city of Nara early Friday, police said.

4)   Uber Technologies Inc said it will choose from five countries including Japan to test its flying taxi services, aiming to launch the commercial operation in 2023.

The other candidate countries are Australia, Brazil, France and India, the company said

Uber picked the five countries based on such criteria as population and lack of extreme weather. The U.S. firm said Japan is one of the countries with the most advanced public transportation systems.

5)   The Okinawa prefectural government has revoked a landfill permit for a new US Marine Corps base in a coastal area of Nago City. The move is aimed at blocking reclamation work by the central government.

The welfare ministry on Thursday released the figures for the year through March 2018 at a meeting of the heads of child consultation centers nationwide.

7)   Many people at a public hearing have criticized a plan to release water containing radioactive tritium into the sea from the crippled Fukushima Daiichi nuclear plant.

Contaminated water is generated daily at the plant in the process of cooling the damaged reactors. The water is being treated to get rid of radioactive substances, but tritium is difficult to remove.

Among the possible options to dispose of the tritium-laced water, the government says diluting and releasing it into the sea is the quickest and most inexpensive way.

8)   housands of people gathered in a Spanish town to hurl some 145 tons of tomatoes at each other in an annual summer festival.

9)   A US newspaper is reporting that senior US officials expressed irritation that Japan concealed a meeting with North Korea last month.

The Washington Post reported in Tuesday’s electronic version that the secret meeting took place in July in Vietnam. 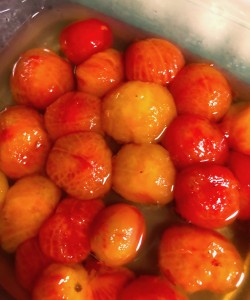